No wonder writing is such hard work! You’re strip mining your own head, every day, searching for this stuff – and then those moments of revelation are like a godsend.

I often write from experience, and if you’re a writer yourself, you’ll know how awkward that is to explain to people:

Writer: “Yeah, it’s kind of a personal story, I suppose.”

Them: “Uh…this is about a girl who has an inappropriate relationship with her uncle and flies around on an airship through a weirdly literal liminal space?”

Writer: “No! NO! Not the inappropriate bits!”

…the point is, when you write a character–any character, even one that has nothing to do with you–you’ve got to get into their headspace. Their actions, their thoughts, their dialogue…not only must it be internally consistent, it needs to feel REAL. And while it’s possible to model experiences after things you’ve read or seen or witnessed, at the end of the day, a writer is drawing on their own experience of any given emotion in order to effectively portray that emotion. 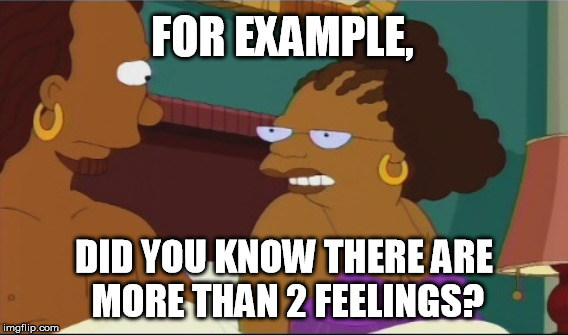 “Okay…so this character is a guy, and he’s sad. I know guys express that differently, but…what does it feel like when I’m sad? Like REALLY sad? Ok…there’s a feeling of sharpness, I think. No…it’s like, you feel completely isolated by your emotion, and you’re simultaneously keenly aware of that isolation, until that awareness sort of overpowers everything else about the experience. So…let’s write that down, somehow.”

Now, the character might be sad for reasons that are completely foreign to me, personally–it’s hard to know exactly how a dude might feel after they’ve been blackmailed, gone on a terrible bender all night, and then accidentally fallen in love with their friend’s boyfriend–but I know what sad feels like. I know what isolation feels like. I know what it feels like to go on a small bender (distant memories!), so you take those experiences and you build off them.

Bart: “But now all I have is this weird, hot feeling in the back of my head.”

Inevitably, though, the result is a sense of connection to your own writing. I don’t think this happens for all writers, but for some, it’s unavoidable. The story is personal–not because this happened to you, but because you put a piece of yoursef into it. And that can be…challenging, sometimes.

Slogging away at my current work-in-progress, I needed to write a scene in which a woman gets an email from her abusive ex-boyfriend. I already knew, deep down, I’d been basing this guy on an old ex of my own–not literally, but loosely, in the sense that I knew how I’d been treated, and I was using those old memories to fuel some of the feeling in the story.

I decided this needed to feel real. Authentic. In-the-moment. So I decided to go back and see if I had any actual emails from that old boyfriend lying around.

I didn’t. I must have deleted them all, thank god. But I did have our old chats–I hadn’t deleted those. Some were pre-breakup, many intermediate, some post. It was hard to tell which were which. And it was uncomfortable, because it wasn’t just HIS words, it was mine: the words of an obviously depressed, extremely upset, and occasionally drunk twenty year old girl who couldn’t understand why someone would say “I love you” and then turn around and act like a dick. These were the words of two people who were far too co-dependent, increasingly unsure of their own mental stability, one of whom (him) was clearly gaslighting the other (me) on a regular basis.

That was, of course, almost fourteen years ago. I’ve since recovered, become a very different person, and married a wonderful, loving spouse. But to write this scene, I felt…I needed to, very briefly, get back into that headspace. I needed to try and remember what that was like.

I hope I succeed. It wasnt’ a pleasant thing to do, and much like getting into a bath before you check the temperature, I basically launched myself right back out again going “YEOWWW!” and feeling a little scalded. But all this is to say:

Writing is hard work. It’s more than strip-mining your head, as Davies puts it. It’s strip-mining your soul, so that you can create a false experience that feels like a real one, that will in turn resonate with other people. Because while THEY might not know what it’s like to be abandoned by your dark-elf boyfriend because he’s afraid of commitment and also going off to be a medic in the dragon wars…well, if you work hard, they’ll at least understand the sadness of being left behind.

Love what you do and you'll never work a day in your life.