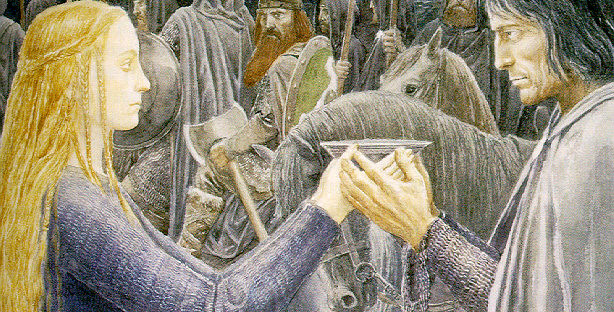 “A time may come soon,” said he, “when none will return. Then there will be need of valour without renown, for none shall remember the deeds that are done in the last defence of your homes. Yet the deeds will not be less valiant because they are unpraised.”

She answered: “All your words are but to say: you are a woman, and your part is in the house. But when the men have died in battle and honour, you have leave to be burned in the house, for the men will need it no more. But I am of the House of Eorl and not a serving-woman. I can ride and wield blade, and I do not fear either pain or death.”

“A cage,” she said. “To stay behind bars, until use and old age accept them, and all chance of doing great deeds is gone beyond recall or desire.”

This scene is hot. Fire. And just a heads up: I don’t want anyone talking about the movie, here. It’s real good, but that’s NOT the scene we’re breaking down today. We’re talking about the writing itself, as it is here, and why it’s so good.

I admit: part of what’s good about this scene is that there isn’t really any romantic tension in the Lord of the Rings until we meet Eowyn, and when we do, it’s sort of surprising. But what’s also good about it is–and I bet you don’t remember this–the last person to stand up to Aragorn was Gandalf. Like, a powerful wizard. Eowyn recognizes Aragorn’s lineage and power (that’s made quite clear in a prior scene), but she does not give a fuck. And she’s not just doing this to be with Aragorn: she’s aligned with Merry later in the narrative because their common beat is that they’re tired of being left behind. By anyone.

But what makes this scene is that line–the scene actually goes on, but I’ve stopped it there–“To stay behind bars, until use and old age accept them, and all chance of doing great deeds is gone beyond recall or desire.”

There’s so much going on here:

-It’s a summary of the Rohirric culture as a whole; a culture based on great deeds and the stories sung about them. Eowyn is of Rohan, and this is all she’s ever wanted.

-It’s a summary of her. Eowyn is meant for greater things. She is a daughter of kings. It’s in her nature to seek glory.

-It’s one of the most poignant lines ever written by a man about a woman. The author feels for this character, and you can’t feel for someone if you don’t understand them. Say what you like: Tolkien clearly understood that Eowyn saw her role as a cage, a trap. And he gives clear voice to that when she tells Aragorn to essentially go fuck himself.

…that’s why this is good. Because it’s not just about a lady pining after a dude. It’s about a culture, AND a character, AND it’s commentary on that character’s role WITHIN that culture, all in the space of a couple paragraphs.

Art is by Alan Lee – an illustration for Book V, Chapter II, “The Passing of the Grey Company,” of The Lord of the Rings: The Return of the King.

Love what you do and you'll never work a day in your life.